I finally received one of my grail dolls yesterday, iplehouse Gentle Cocori! I was so happy when I saw that she arrived in Canada and was out of customs within a day. Surprisingly the brokerage fees were not bad and I got her in early morning (which rarely happens).

When I opened her, I was surprised to see she came with a soft doll carrier. Make life easier for me as I don't have to squeeze my two girls in the coffin carrier (I think it's possible though, we'll see once Reily makes it here). Inside the carrier she was wrapped in two pillows and bubble wrap. After releasing her from the carrier, I immediately brought her to my sewing room to see what she could wear in the mean time. She's borrowing a shirt and pants from Tai (surprisingly they find with some little adjustments). 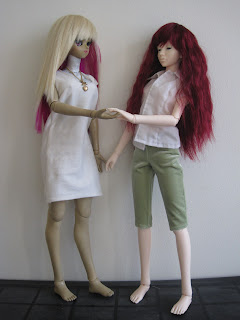 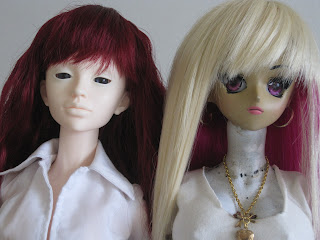 I usually make my doll wigs but I saw a nice wine coloured one at Anime North and decided to buy it for a doll so I tried it on. Not too sure how I like it with her so I'll be making a new one today or later this week. Here's a few pictures on her trying on Tai's wigs. 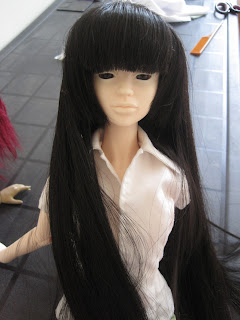 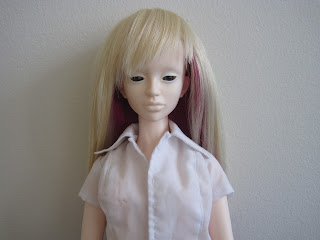 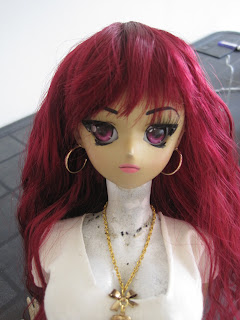 (Tai trying on wine wig, not too bad)

I was having fun attempting a face up but sadly I had to work last night. I didn't get too far with it and I definitely need more practice. Some how I found it easier to paint Tai's face, Raven's requires more details. Anyhow, here's was a came up with in a short amount of time, most likely its going to change. 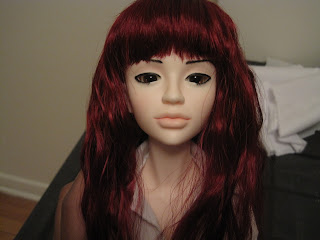 In other news, I went to a local doll meet on Sunday and I shall be posting the pictures in a later post. Until next time!